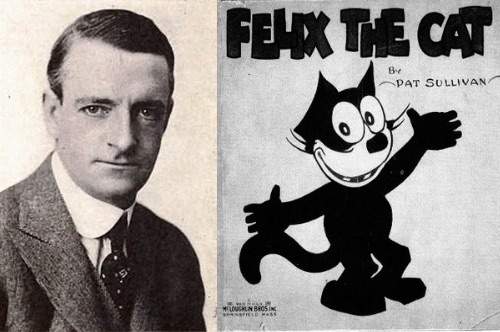 Pat Sullivan was an Australian cartoonist, animator and film producer best known for being co-creator of the character Felix the Cat. Felix was created before Mickey Mouse and in the 1920’s was the most famous animated cartoon series in the world.

Patrick Sullivan was born in Paddington, New South Wales in 1887. Like most Australians leaving school then and now, he had no idea of his future. He tried his hand at odd jobs as well as singing, dancing and while attending art classes began to submit cartoon strips to publishers. He emigrated to England in search of his dream and ultimately found his way to the USA. At age 23 his creative career began, drawing movie posters.

He then worked for the Maclure Syndicate as a cartoon assistant on the strip Little Black Sambo, based on the popular children’s book. After several years contributing to a range of comic strip characters syndicated to newspapers, Pat founded his own cartoon studio and employed other artists. His cartoons stood out for their comedy and clever story lines. Felix the Cat was introduced by the Pat Sullivan Studios in November 1919 and became an international commercial hit.

Felix was the first cartoon character to be globally merchandised making him as recognisable as any Hollywood star. He paved the way for all cartoon stars who followed, most notably Walt Disney’s Mickey Mouse. A Felix the Cat newspaper strip syndicated through King Features ran from 1923 to 1967 and Otto Messmer, Sullivan’s co-creator, is acknowledged for his development of the Felix character.

Unfortunately, success can have its down side and Pat’s heavy drinking and untimely death of his wife furthered his alcoholism and resulted in his death 1 year later in 1933 aged 46.