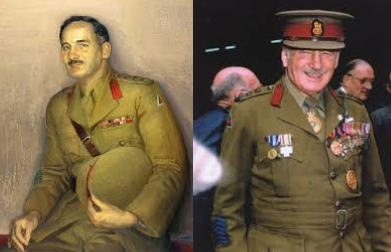 Veteran of the Second World War, Edward Dunlop became well-known for his medical work with Australian prisoners of the Japanese and subsequent welfare work after the war. He was born on 12 July 1907 at Major’s Plain, Victoria.

At 17 he became an apprentice pharmacist before moving to Melbourne to study at the Pharmacy College. In 1930 he was awarded a scholarship to study medicine at Melbourne University. There he picked up the nickname, ‘Weary’ probably because he always looked buggered. That affectionate name remained with him for the rest of his life. In 1934 he graduated with first class honours.

From his previous part-time army service, Dunlop re-joined the military in 1935 as a captain in the Australian Army Medical Corps. In 1937 he graduated from Melbourne University as a Master of Surgery before attending St. Bartholomew’s Medical School in England where he was admitted to the Royal College of Surgeons in 1938.

In 1939 Dunlop enlisted in the AIF for service overseas. Dunlop served in the Greek and Crete Campaigns with the 2/2nd Casualty Clearing Station, and was later senior surgeon in Tobruk. When the war in the Pacific began, his unit was transferred to Java. He was promoted to temporary lieutenant colonel in February 1942 and given command of No. 1 Allied General Hospital at Bandung. When the island fell to the Japanese Dunlop became a prisoner of war.

For the rest of the war Dunlop worked as a medical officer on the Burma Thailand railway. He became famous for his relentless care of his men. They looked up to him as a saviour, placing himself at risk of death to ease their suffering and the legend of Weary began.

Sir Weary Dunlop was a bloody clever surgeon and ingenious in the solutions he developed to protect his men.