When Australians think of our Olympic champions, the name Cathy is always mentioned, and we all know there is only one Cathy; Cathy Freeman. We all remember the joy of running flat out with the wind in our hair, but Cathy made that joy her purpose and ignited our minds to recognise Indigenous Australians as equals.

Cathy was born in Mackay Queensland in 1973. Her natural athletic ability helped overcome her shyness and low self-esteem.

Cathy’s Primary school teacher Mrs Bauldry nurtured Cathy’s talent and bought her running spikes to compete at State Primary events in long jump, high jump and running. She was one of the many influencers who helped guide Cathy’s future. Her Step Father helped her Mother Cecilia to secure a scholarship at Fairholme College Toowoomba. Her coach, Mr Sessargo, mentored Cathy, helped her to fit in with the self-confident white kids and feel ‘good enough’. At the age of 14, Cathy told the high school vocational guidance officer that her only career aspiration was to win an Olympic medal. Cathy already held national titles in high jump, the 100 metres, 200 metres and 400 metre sprints.

Cathy went on to win gold in the 1990 and 1994 Commonwealth Games, silver at Seoul Olympics in 1996 and with the pressure of all of Australia on her shoulders, won Olympic Gold in the 400 meters at the Sydney 2000 Games. 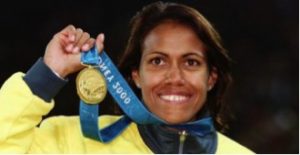 Cathy Freeman OAM Young Australian and 1997 Australian Of the Year inspires us all.  Cathy’s humility and inner beauty captured our hearts and raised our nations respect for Aboriginal people, which remains her mission today. Cathy ignites the imagination of many young Australians and is living proof that all things are possible.

This is an unauthorised story snapshot of another Bloody Clever Australian.